The 'Palace of Puffs' 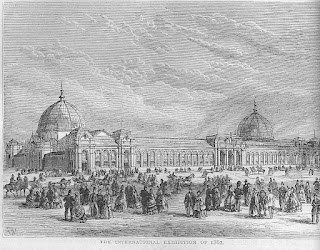 My latest feature for Discover Your Ancestors magazine (digital edition, June) is on the 1862 International Exhibition.

The landmark 1851 International Exhibition - with its glittering Crystal Palace -  was the envy of the world. Events like these became a matter of national pride. Four years later, the French held an International Exposition at Paris.

In 1857, the arts were represented in Manchester's Art Treasures Exhibition, which was also an unqualified success.

So public expectations ran high for the opening of 1862 'World's Fair' at South Kensington, London. But the project was dogged by difficulties from the beginning. And the exhibition building's design, by Captain Fowke, proved highly controversial...

Do pop over to the NFReads website where you can read an interview with me (and lots of other authors!).

Obviously I would have loved to have been dressed like this for the interview - 'Carriage Dress', Ackermann's Repository, March 1816.

Scotland's national bard, Robert Burns, lived in Mauchline with his long-time sweetheart Jean Armour from the spring until the autumn of 1788. His farm, which he shared with his brother Gilbert, was at nearby Mossgiel.

While at Mossgiel, Burns wrote some of his most famous poems, including To A Mouse, The Twa Dogs, The Holy Fair, and The Cotter's Saturday Night.

Jean, the daughter of a local stone-mason, was pregnant with twins for the second time. (One of her first twins had sadly died). She had been thrown out by her parents, who were furious when they found that Burns had got her pregnant again.

For her confinement, Robert found her a room in Mauchline (on the upper floor of the Burns House Museum, left). At this date, Burns believed that the couple were no longer married, as Jean's family had destroyed a piece of paper which showed they had wed informally.

Unfortunately, Jean lost both her twins shortly after their birth. Shortly afterwards, Jean and Robert were formally married by the local justice, Gavin Hamilton.

Meanwhile, Burns was on the look-out for a new farm, as Mossgiel was not proving profitable. He settled on Ellisland Farm. However, its house was not habitable, so Robert set about building his family a new home. Burns, Jean, and their young son Robert, moved to Ellisland in December 1788.

Mauchline is a bustling small town, and you can still see many of the buildings that Burns and Jean knew (see below). 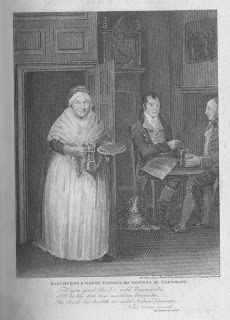 The 'Sma' Inn' which belonged to Nanse Tinnock ('Poosie Nansie') in Castle Street is part of the Burns House Museum site.

Another inn owned by Nanse Tinnock (pictured with Burns on the left) is on the corner of Loudon Street and Cowgate (photo, below right).

Mauchline church is not the same building as the one known by Burns, as it was replaced in 1829. 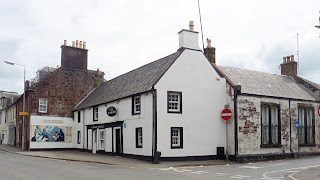 However, there are several interesting memorials of Mauchline folk who Burns was acquainted with, some of whom are mentioned in his poems.

Several relatives are also buried in the kirkyard - his brother John, and four of Robert's children by Jean Armour.

Paying morning visits was an important part of fashionable life - and it was important that a lady was properly dressed. Popular magazine The Lady's Monthly Museum included up-to-date fashions for its fair readers. The lady on the left is wearing a 'Plain White Gown' (like the ones favoured by Eleanor Tilney in Jane Austen's Northanger Abbey), with a 'Cloak of Purple Velvet, hanging in a point behind, trimmed with broad Black Lace'. She is sporting a 'Black Velvet Cap' with a 'Bandeau of Pink Ribbon', with a pink handkerchief and pink shoes. For warmth, she is carrying a 'Bear [skin] Muff'. Her companion is also attired in a 'Plain Gown' with a 'Cloak of Scarlet Kerseymere, trimmed with Sables, having either a hood or cape trimmed with the same'. This lady's 'head-dress' is made from 'Purple Velvet, with Bandeau, Puffing, and Rose of Scarlet Ribbon', with matching shoes. 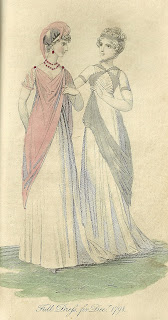 Plain gowns were also popular for evening wear, with suitable embellishments. Full dress (image right) for the first figure comprised a 'Round Gown, with the Agatha Robe of Pink Muslin'. The robe had satin half-sleeves, and was fashioned on each shoulder with a cornelian clasp. The lady is wearing a coral necklace and earrings, and a turban of purple velvet trimmed with white satin and pink muslin; purple shoes to match. The lady on the right is wearing a lilac muslin half-robe over her round gown with lace tucker. Her head-dress is a lilac 'fillet' fastened under her chin, decorated with pearls.
On 18 December 1798, Jane Austen was looking forward to a ball. She wrote to her sister Cassandra, 'I took the liberty a few days ago of asking your black velvet bonnet to lend me its cawl, which it very readily did, and by which I have been enabled to give a considerable improvement of dignity to cap, which was before too nidgetty to please me. I shall wear it on Thursday, but I hope you will not be offended with me for following your advice as to its ornaments only in part. I still venture to retain the narrow silver round it, put twice round without any bow, and instead of the black military feather shall put in the coquelicot one as being smarter, and besides coquelicot is to be all the fashion this winter. After the ball I shall probably make it entirely black'.
A very Happy Christmas to all my readers!
Posted by Sue Wilkes at 17:31 No comments:


Tomorrow marks 250 years since the birth of Sir Walter Scott, novelist and contemporary of Jane Austen. Young 'Wattie', as he was affectionately known by his family, was born 'in a house belonging to my father, at the head of the College Wynd' in Edinburgh, he later recalled.

At first Walter was a healthy child, but after an illness in which he lost the use of his right leg, he was sent to live with his paternal grandparents on their farm at Sandy Knowe, Roxburghshire. The fresh country air and lots of exercise greatly restored Walter's health, although he was left with a permanent limp.

But his stay at Sandy Knowe left an even more lasting legacy. His grandmother, and his Aunt Jenny, told Walter lots of stories and legends about the Border reivers, and the ill-fated Jacobite rebellions. These tales fired the young lad's imagination, and later inspired his poems and fiction.

After attending school at Edinburgh and Kelso, Walter studied at Edinburgh University before becoming indentured to his father to train as a Writer to the Signet. When his apprenticeship ended, Scott trained for the Scottish Bar. In 1792 he qualified as an Advocate 'with all its duties and honours'.

While studying at Edinburgh, Walter joined several literary societies. He also composed poetry. During the course of his legal training, he also visited the Highlands - and its scenery had a lasting impact on him.

Following an unrequited love for a young lady he met during his teens, Scott fell for the dazzlingly beautiful Charlotte Carpenter (Charpentier). They married at Carlisle in 1797. Two years later, Scott was appointed Sheriff-Depute of Selkirk.

Scott's first full-length publication, The Minstrelsy of the Scottish Borders (1802) was a collection of traditional Scots ballads (see Alistair Johnson's essay here); it also included some of Scott's own work. The Minstrelsy was a best-seller, and laid the foundations of Walter's first full-length published poem, The Lay of the Last Minstrel (1805), followed by Marmion; A Tale of Flodden Field. (1808).

His poetry was incredibly successful, and warmly received by the critics. However, he had also been trying his hand at fiction, and his novel Waverley was published anonymously in 1814. Waverley was a runaway success, and the stage was set for Scott's incredible writing career. He published over twenty novels before his death in 1832. Walter sold a phenomenal number of books during his lifetime, and the proceeds helped to fund his dream home - Abbotsford - his 'Conundrum Castle'.

Scott's later years were overshadowed by illness and financial troubles, and the death of his wife. The collapse of his publishers led Scott to try and repay his debts honourably, by writing. He successfully reduced a large amount of the debts before his death at Abbotsford in 1832.

All images from the author's collection. 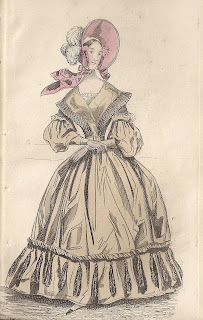 I'm very pleased and honoured to say that I've just been elected a Fellow of the Royal Historical Society! I'd particularly like to thank the President, Emma Griffin, for supporting my application. I am really looking forward to joining this international community of historians, and helping to promote and support the discipline of history as much as I can. 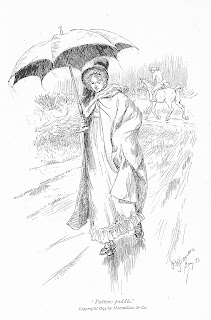 It has been brought to my attention that the old 'subscribe by email' function, previously provided by Feedburner, will stop working in July. Therefore, I've switched subscribers to the new follow.it service (with help from my dear husband Nigel, and from technical support!) Current subscribers should be switched automatically, if all goes well.

It's raining today, so here's a nice illustration of a lady wearing pattens - essential wear in Jane Austen's day.