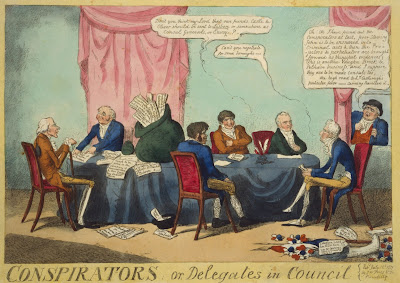 On 28 March 1817, William Oliver, using the name Mr Richards, delivered a letter in person at the Home Office. He requested a ‘private interview’ with Lord Sidmouth to offer his services to the government, as he had ‘material information for the welfare and justice of this country’.

Oliver knew Charles Pendrill, one of Col. Despard’s fellow conspirators. But Pendrill was now one of Arthur Thistlewood’s friends, and Oliver realized he too must be on the Home Office’s list of suspects. Oliver acted fast to save his own skin.

Sidmouth saw him the same day and accepted Oliver’s offer. The home secretary told him that Pendrill was a wanted man - there was a warrant out for his arrest. So Oliver must have felt that he’d done the right thing. Sidmouth gave Oliver a new mission: to infiltrate the reformers’ meetings in central and northern England. Did they want parliamentary reform by peaceful means – or were they planning to take up arms? 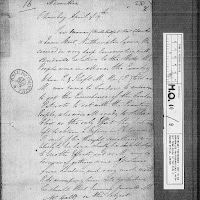 But Oliver could not just stroll into the reformers’ meetings and start asking questions. Pendrill told Oliver that Joseph Mitchell, a firebrand reformer from Liverpool, had come to London to get the ‘London Patriots’ to act in concert with the ‘Country People, who were all ready to strike a blow as the only Effort...left to obtain a Reform in Parliament’.
Fortuitously, Pendrill said, Mitchell wanted some ‘intelligent active Person from London’ to come to the manufacturing districts with him. With Pendrill’s help, Oliver met Mitchell on 17 April in London. Within a week, Oliver was on his way north with Mitchell – little dreaming that just a few months later, he would be ‘outed’ by the press as an infamous spy...
Images:
‘Conspirators, or Delegates in Council’. On the far left, Lord Sidmouth (with a cane) is given a paper by former spy Thomas Reynolds (who was given a consulship). A huge ‘green bag’ full of Radical papers sits on the table. Seated on the right, from left to right are spies John Castle (with his back to the reader), William Oliver, then Canning and Castlereagh.  On the far right, honest John Bull looks through the window, horrified by the proceedings. George Cruikshank, 1817. Courtesy Library of Congress, LC-USZC4-6856.
The start of Oliver’s ‘Narrative’ of his dealings in the Thistlewood papers, HO40/9.
Posted by Sue Wilkes at 09:30