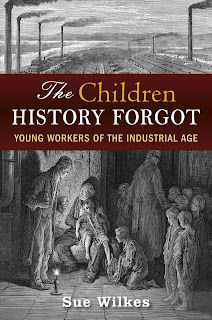 'I read your books The Children History Forgot and Tracing Your Canal Ancestors.  They were fantastic... I loved both books.  I knew poor children had it rough but had no idea just how bad their conditions were, or the appalling way they were treated. It was certainly an eye-opener!' Mr Andrew Bell, Shetland.

‘Sue Wilkes’ latest book is an impressive account, both describing the exploitation of child labour at the very heart of British society, and the struggle for reform over the issue. The book starts with the collapse of the centuries-old apprenticeship system with the rapid developments of the Industrial Revolution, and shows how…children from as young as seven years old were increasingly forced to work as parish apprentices in factories, often on fifteen-hour days. Reformers such as Robert Owen in New Lanark tried to improve conditions… but progress was slow.

Wilkes skilfully describes the battles fought for reform on all fronts, in the mines, the agricultural sector, the factories and even the humble domestic chimney, in an attempt to allow children to right to simply be children once more. A powerful account recalling a forgotten workforce on which an empire was built’. Discover My Past England, September 2011.


'While we may often bemoan current health and safety regulation, just imagine what life would be like were there none... no laws regarding working with dangerous chemicals; no safety equipment... and no education, no hope of a better life but for a fortunate few. Yet this was the draconian reality of life for a silent majority... Wilkes' work is eminently fascinating, and is a necessary and valuable piece of research into an era that may have gone - at least on these shores - but should not be forgotten'. Your Family History, Issue 20.

'Sue Wilkes traces the human cost - in human and economic terms - of Britain's success... Wilkes gives graphic descriptions of the "fearful conditions" in which children worked... This book is meticulously researched with fascinating documentary evidence and excellent illustrations. It can be recommended as an informative and compelling work... it engages and educates from start to finish.' Parson Woodforde Society Quarterly Journal, Autumn 2011.

‘Sue Wilkes’ latest book tells the story of the long fight for… reform during the late Georgian and Victorian eras and takes a fascinating insight into the working lives of our ancestors’. Chester Chronicle, Flintshire Chronicle, 8 September 2011.

'The style is colloquial... this book... will... successfully appeal to its intended readership'.  Book reviews, Transactions of the Historic Society of Lancashire and Cheshire, Vol. 160, 2011.
Posted by Sue Wilkes at 13:30