Today I'd like to welcome back fellow Pen & Sword authors Joanne Major and Sarah Murden to my blog! They have a fascinating new book out, which you can order here!

Eleanor Coade was an extremely successful businesswoman during the Georgian era, something which was highly unusual. It seems likely that she inherited her business acumen from her grandmother, Sarah Enchmarch, a formidable woman from Tiverton, Devon who took over the running of the family textile business for some twenty-five years following the death of her husband, Thomas in 1735.

On reading Sarah Enchmarch’s will (proved in 1760), it is clear that as well as providing for her sons, she wanted to ensure that her six daughters were well provided for and that the legacies they received were to be for their use, exclusive of their husbands or future husbands. Sarah also left a legacy of five hundred pounds for her two Coade granddaughters, money that would be invaluable to Eleanor when she came to establishing her own business.
Eleanor is noted for the invention of a product known as Coade Stone, also called Lithodipyra; the secret of its manufacture endures to this day. She ran her very successful manufacturing operation for over fifty years by the King’s Arms Stairs on Narrow Wall in Lambeth, having taken over the ailing artificial stone business of a Daniel Pincot in 1769.

You rather get the impression that Eleanor was not a woman to be trifled with and she certainly stood her ground, as shown in the Public Advertiser of September 1771, when she wanted to make it very clear that Daniel Pincot was certainly not the owner of the business, despite rumours to the contrary.

Whereas Mr Daniel Pincot has represented himself as a partner in the Manufactory conducted by him, ELEANOR COADE, the real proprietor, finds it needful to inform the public that the said Mr Pincot is no other than a servant to her and that no contracts, or agreements, discharges or receipts will be allowed by her, unless signed by herself.

The product Eleanor developed was described in a sales brochure for her showroom which opened in 1799, as giving ‘durability resembling Jasper and Porphyry. Frost and Damps have no effect upon it, consequently it retains a sharpness not to be diminished by the changes of climate’.

Every piece of stone sent out had the name COADE indented on it, effectively copyrighting Eleanor’s work. She was certainly not backward in coming forward in promoting her product and the brochure listed numerous places across Britain where you could see examples of her work and Coade stone was exported around the world, everywhere from Philadelphia to Poland. Eleanor opened a gallery to which the public were admitted between 10am and 4pm for one shilling per person, so she even managed to make money by charging people to see her work, let alone sell it – what a businesswoman she was!


Another example of her strong character was evident in 1774. She was annoyed that, as a result of a hard frost, a number of pieces made from artificial stone were damaged and so again took to the newspapers to make it crystal clear that such damaged pieces were an inferior product and not from her factory.

Eleanor Coade was a neighbour of the subject of our latest biography, A Georgian Heroine: The Intriguing Life of Rachel Charlotte Williams Biggs. Charlotte, as she preferred to be known, was the daughter of a Welshman who relocated to Lambeth when she was still a child. The Williams family took a house on Narrow Wall (where the Festival Hall complex is now situated) just a few doors away from Eleanor’s artificial stone manufactory. Eleanor Coade was probably aware of the gossip surrounding Charlotte’s torment in her late teens by a ‘libertine, half mad and half fool’, a man who owned one of the timber yards on the Lambeth shoreline and whose mother also lived on Narrow Wall.
If you’d like to discover more about Charlotte and her Lambeth neighbours, all is revealed in A Georgian Heroine: The Intriguing Life of Rachel Charlotte Williams Biggs which is out now in the UK (and coming soon worldwide) and can be found at Pen & Sword, Amazon and all good bookshops. 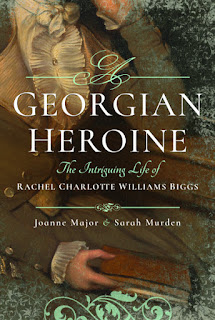 Rachel Charlotte Williams Biggs lived an incredible life, one which proved that fact is often much stranger than fiction. As a young woman she endured a tortured existence at the hands of a male tormentor, but emerged from that to reinvent herself as a playwright and author; a political pamphleteer and a spy, working for the British Government and later single-handedly organising George III’s jubilee celebrations. Trapped in France during the revolutionary years of 1792-95, she published an anonymous account of her adventures. However, was everything as it seemed? The extraordinary Mrs Biggs lived life upon her own terms in an age when it was a man’s world, using politicians as her mouthpiece in the Houses of Parliament and corresponding with the greatest men of the day. Throughout it all though, she held on to the ideal of her one youthful true love, a man who abandoned her to her fate and spent his entire adult life in India. Who was this amazing lady?

In A Georgian Heroine: The Intriguing Life of Rachel Charlotte Williams Biggs, we delve into her life to reveal her accomplishments and lay bare Mrs Biggs’ continued re-invention of herself. This is the bizarre but true story of an astounding woman persevering in a man’s world.

That's really interesting Sue. There is a coade stone statue of a Lion on the south side of Westminster Bridge, right next to the old County Hall.It is not far from the Royal festival Hall and of course the , as you point out, site of the code stone factory. Apparently John Fowles, the writer of novels such as The Magus, lived in a large house in Lyme Regis that is adorned with coade stone.

Thanks Tony, we're really pleased you enjoyed it. Due to the durability of the stone, many buildings, statues etc that used this stone still remain today around the world.

There's a bit about the recipe and method here: http://www.architectural-heritage.co.uk/p/antique-%26-fine-reproduction-garden-ornament/garden-ornament-history/coade-stone

There is a marvellous book on Eleanor Coade by Alison Kelly, "Mrs Coade's Stone".
The site of the Coade works, on the South Bank between what are now the Festival Hall and the Hayward Gallery, was identified in 1951 when the Festival of Britain site was cleared. A circular pattern in the pavement ourside marks where one of the factory's horse mills had stood.

Many thanks, Naomi and Austen, some really interesting and useful information there. We will no doubt be doing some more research into her life and work in the future, so both the website and the book will be really helpful :)