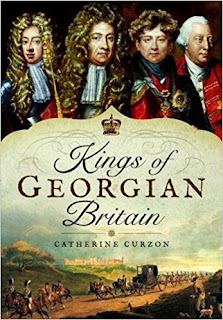 Today I'm welcoming fab historian Catherine Curzon back to my blog! Her new book Kings of Georgian Britain is available now from Pen and Sword, Amazon UK and Amazon US.
Over to you, Catherine!

A Family in Mourning

There is much to be said for a loving home and a warm hearth and for King George III and Charlotte of Mecklenburg-Strelitz, family life was an anchor in stormy waters. As war raged in America, debate raged in Parliament and his eldest sons raged to whoever would listen, George took refuge in the gentle comfort of his wife and their growing brood of children.

As parents to fourteen children, the royal couple knew that they had been fortunate in not yet having lost  any of their offspring. They were devoted parents who always made time for play, yet real life was about to force its way brutally into this happy idyll. In the space of less than twelve short months, those loving parents would lose not one child, but two.

In the eighteenth century, smallpox was a very real and present threat to the lives of all, whether prince or pauper. The disease claimed hundreds of thousands of lives and those who survived were often left with devastating side effects that ranged from disfiguring scars to total blindness. For any parent, the news that their child had been infected would be terrifying and inoculation was growing in popularity, despite its risks.

In 1782, George and Charlotte took the decision to have their youngest children inoculated against 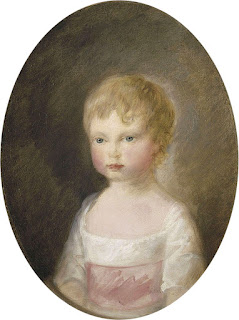 smallpox and by June, they no doubt rued that day. Little Alfred, the couple’s youngest son, younger than his oldest brother, fell ill not long after receiving the treatment. In order to speed his recovery, he was taken to enjoy the sea air at Deal in the care of Lady Charlotte Finch, the household’s trusted nurse.

A cheery little boy with a bright disposition, Alfred was nevertheless laid low by his inoculation and began to experience smallpox-like blemishes on his face, whilst his breathing grew ever more laboured. Only when it appeared that the seaside was not working its magic was he returned to Windsor. Here he was attended by court physicians and their conclusion, when it came, was devastating. Little Alfred would be dead within weeks.

“Yesterday morning died at the Royal Palace, Windsor, his Royal Highness Prince Alfred, their Majesties youngest son. The Queen is much affected at this domestic calamity, probably more so on account of its being the only one she has experienced after a marriage of 20 years and having been the mother of fourteen children.” (London Chronicle, August 20, 1782 – August 22, 1782; issue 4014, p.1.)

Prince Alfred of Great Britain passed away on 20th August 1782, just a month shy of his second birthday, and the royal family was rocked by his death. He was buried at Westminster Abbey with full honours and though George and Charlotte mourned his loss, they took comfort in their surviving children. The king, in particular, doted on the boy who was now his youngest son, three-year old Octavius. In his darkest moments he admitted that, should Octavius have died, then he would wish himself dead too.

These were to be fateful words.

Despite Alfred’s death, it was still reckoned that inoculating the children against smallpox posed less of a risk than leaving them open to the infection so Octavius and his sister, five-year-old Princess Sophia, were given the treatment. Whilst Sophia suffered no ill effects, things did not go so well for Octavius. 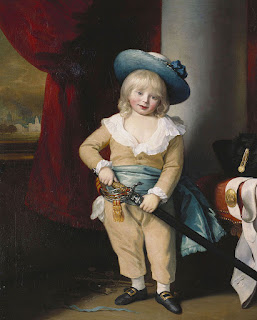 The queen was pregnant with her final child when, just days after receiving the inoculation, Octavius fell ill. Unlike Alfred, whose sickness progressed over time, Octavius declined with alarming speed and died on 3rd May 1783. The king was beyond devastated, tormented to distraction by grief and lower than he had ever been.

“On Saturday, on the Majesties arriving at Kew, in their way to Windsor, and finding Prince Octavius in a dangerous Way, they determined to stay there all Night and sent an Express to Windsor to acquaint the Attendants of the Reason of their continuing there. The same Night died at Kew, his Royal Highness Prince Octavius, his Majesty’s youngest Son, in the fifth Year of his Age.” (Daily Advertiser, Monday, May 5, 1783; issue 17249, p.1.)

The king brooded on the loss of his children, convinced that their inoculation against smallpox had contributed to their early deaths. Where once there had been the laughter of infants, the gentle distraction offered when Charlotte and George played adoringly with the youngsters, now there was only silence and grief, the royal household plunged into sadness. A little respite came with the birth of Princess Amelia in August of that same year and George showered her with love, filling the void where his sons had been with the cheer of this new daughter. Little Amelia, or Emily, as she was known, lived through childhood but years later it would be her death that was to have a catastrophic effect on the father who adored her.

Catherine Curzon is a royal historian who writes on all matters 18th century at www.madamegilflurt.com. Her work has been featured on HistoryExtra.com, the official website of BBC History Magazine and in publications such as Explore History, All About History, History of Royals and Jane Austen’s Regency World. She has provided additional research for An Evening with Jane Austen at the V&A and spoken at venues including the Royal Pavilion in Brighton,
Lichfield Guildhall, the National Maritime Museum and Dr Johnson’s House.
Catherine holds a Master’s degree in Film and when not dodging the furies of the guillotine, she lives in Yorkshire atop a ludicrously steep hill.

About the Book
For over a century of turmoil, upheaval and scandal, Great Britain was a Georgian land.

From the day the German-speaking George I stepped off the boat from Hanover, to the night that George IV, bloated and diseased, breathed his last at Windsor, the four kings presided over a changing nation.

Kings of Georgian Britain offers a fresh perspective on the lives of the four Georges and the events that shaped their characters and reigns. From love affairs to family feuds, political wrangling and beyond, peer behind the pomp and follow these iconic figures from cradle to grave. After all, being
a king isn’t always grand parties and jaw-dropping jewels, and sometimes following in a father’s footsteps can be the hardest job around.

Take a trip back in time to meet the wives, mistresses, friends and foes of the men who shaped the nation, and find out what really went on behind closed palace doors. Whether dodging assassins, marrying for money, digging up their ancestors or sparking domestic disputes that echoed down the generations, the kings of Georgian Britain were never short on drama.

Thank you so much. I shared to my Facebook group The British Crown ��.

Wonderful information! I am wondering, did the king and queen inoculate their last child, Amelia, then? Given the comment, "convinced that their inoculation against smallpox had contributed to their early deaths." I am curious. And also, what did she die of?

They did inoculate Amelia, because the benefits were still believed to outweigh the risks; she died of TB, but had never been the most robust girl!