Life In the Georgian Court 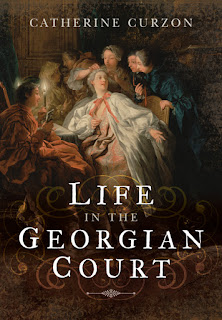 Today I'd like to welcome the fabulous Catherine Curzon to my blog. Catherine's new book Life In the Georgian Court has just been published by Pen & Sword, and I'm sure it will be a must-read for fans of that era!

The Greedy End of a Gluttonous King

Whilst researching my book, Life in the Georgian Court, I came across no shortage of dramatic stories and tragic deaths. From smallpox to strangulation, guillotine to gangrene, our 18th century royals didn’t always die the most peaceful deaths.
Spare a thought then for Adolf Frederick, the King of Sweden who met his end on 12th February 1771 not by bullet or beneath the battlefield bayonets, but as a victim of pudding.
When the Swedish monarch settled down to enjoy a meal that, as the saying goes, really was fit for a king, he wasn’t in the mood for a simple snack. This well-liked king enjoyed nothing more than indulgence and on this day, he was going to indulge himself like no man had before.
As the hours drew on, he tucked into lobster, caviar, sauerkraut and kippers in abundance, the seemingly endless procession of food barely slowing as the evening passed. The ravenous monarch devoured everything that was set before him, swilling it down with glass after glass of the finest champagne. Yet for every plate that he cleared, Adolf Frederick still had room for more.
One of the king’s favourite desserts was a dessert known as semla, a sweet roll popular in Scandinavia and Eastern Europe. Most diners would content themselves with one or, with a very sweet tooth, maybe two of these super-indulgent treats but at Adolf ’s last meal, the king just kept on going. This was the last meal before Lent so the king was determined to feed himself up, and nothing was going to stop him. 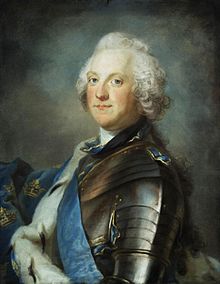 To finish his meal, Adolf wanted semlas… lots of semlas; fourteen portions served in hot milk, to be exact. Once the greedy king was finally sated, he retired to his chambers where his stomach began to grumble and soon, so did he. Adolf died that same day; whether his last meal contributed to his demise we cannot be certain, but posterity has recorded Adolf as the king who ate himself to death, the victim of one semla too many.

About the Author
Catherine Curzon is a royal historian and blogs on all matters 18th century at A Covent Garden Gilflurt's Guide to Life.
Her work has featured by publications including BBC History Extra, All About History, History of Royals, Explore History and Jane Austen’s Regency World. She has also provided additional material for the sell-out theatrical show, An Evening with Jane Austen, which she will introduce at the Royal Pavilion, Brighton, in September (tickets are available here).
Catherine holds a Master’s degree in Film and when not dodging the furies of the guillotine, she lives in Yorkshire atop a ludicrously steep hill.
Her book, Life in the Georgian Court, is available now from Amazon UK, Amazon US, Book Depository and all good bookshops!

About Life in the Georgian Court
As the glittering Hanoverian court gives birth to the British Georgian era, a golden age of royalty dawns in Europe. Houses rise and fall, births, marriages and scandals change the course of history and in France, Revolution stalks the land.
Peep behind the shutters of the opulent court of the doomed Bourbons, the absolutist powerhouse of Romanov Russia and the epoch-defining family whose kings gave their name to the era, the House of Hanover.
Behind the pomp and ceremony were men and women born into worlds of immense privilege, yet beneath the powdered wigs and robes of state were real people living lives of romance, tragedy, intrigue and eccentricity. Take a journey into the private lives of very public figures and learn of arranged marriages that turned to love or hate and scandals that rocked polite society.
Here the former wife of a king spends three decades in lonely captivity, Prinny makes scandalous eyes at the toast of the London stage and Marie Antoinette begins her last, terrible journey through Paris as her son sits alone in a forgotten prison cell.
Life in the Georgian Court is a privileged peek into the glamorous, tragic and iconic courts of the Georgian world, where even a king could take nothing for granted.
Posted by Sue Wilkes at 18:09

Thank you for inviting me to visit your esteemed site!

You're welcome! I'm really looking forward to reading your book!