Today I'd like to give a warm welcome to fellow Pen and Sword authors Joanne Major and Sarah Murden, authors of An Infamous Mistress - a biography of Grace Dalrymple Elliott. But what was the connection between Jane Austen and Grace? You can find out more in Joanne and Sarah's guest blog post:

Jane Austen’s novel Persuasion, written in 1816 and published posthumously just months after her death in 1817, has at its centre the Elliot family – a surname we’re all too familiar with after writing our biography of the eighteenth-century courtesan Grace Dalrymple Elliott.


Anne Elliot, the novel’s heroine, had been persuaded to break off an early engagement to Captain Wentworth of the Royal Navy and, while in Bath, was courted by her cousin and heir to the Elliot estate, the recently widowed and caddish William Elliot.
There is also a Viscountess Dalrymple mentioned in Persuasion, from an Irish family who is related to the Elliots. Anne’s vain father Sir Walter and elder sister Elizabeth court Lady Dalrymple’s attention, determined to make use of their connection to this titled lady (for the finances of the Elliot family are in a decline – they have to rent out their family estate, Kellynch Hall).
It’s possible, as Margaret Doody has speculated in Jane Austen’s Names: Riddles, Persons, Places, that ‘there is a hidden joke, a potentially dirty meaning, in wishing to see Lady Dalrymple’, because Grace’s notoriety would still be remembered when Austen was writing – was this a sly dig at Grace, the name chosen by Austen in the full knowledge that many of her readers would get the joke, especially with the connection between the names Elliot and Dalrymple?
Grace was still alive at the time, although her star had faded somewhat and she was living largely in the shadows of society – wouldn’t you just love to know if she read the novel, and if she did, what her thoughts were on the names of the characters!


Austen’s Elliot family had Scottish origins and Sir John Eliot, Grace Dalrymple’s husband, was a Scotsman, hailing from Peebles. Grace too was from a Scottish family, although hers was more noble in its origin for her maternal ancestors were once the Lairds of Blackburn in the Berwickshire borders. She also counted a countess amongst her close relations for her maternal aunt, Robinaiana, became the Countess of Peterborough, although only after many years of being the Earl’s mistress first, a path her infamous niece was later to follow with significantly less success. Grace never got a title; she was divorced by her husband Dr John Eliot before he became Sir John and her subsequent lover, the Earl (and future Marquess) of Cholmondeley refused to make her his Countess.
If Grace is recalled somewhat in the character of Lady Dalrymple, was her husband Sir John Eliot at all the inspiration for Sir Walter Elliot? Both baronets, Sir John and Sir Walter, were vain and self-satisfied men (although Sir John was certainly more careful of his fortune than Austen’s Sir Walter), and neither man had a male heir (John Eliot’s son by Grace died as an infant, and his only other male progeny was born illegitimately to an unknown woman).
There is another similarity too – Sir Walter takes into his house, ostensibly as a companion to his daughter Elizabeth, a Mrs Clay, an impoverished widow with children to provide for and who has designs on becoming the next Lady Elliot for all that she is beneath Sir Walter on the social ladder. Both before and after his divorce from Grace, Sir John Eliot embarked upon a series of affairs with women well below him socially (one was a tea dealer from the Tottenham Road). At his death his final mistress was, like Austen’s Mrs Clay, angling for marriage and a title – and hoping that her daughter (by another man) would benefit from Sir John’s fortune to the detriment of his own illegitimate offspring.
N.B. – while Sir John was an Eliot, after her divorce Grace habitually spelled her surname differently, using both Elliot and Elliott.
Sources:
Thomas Gainsborough, Jane Austen and Fashionable Society by Catherine Engh on NASSR Graduate Student Caucus, a fascinating read which looks at Gainsborough's portraits of Grace in conjunction with Jane Austen's use of the Dalrymple and Elliot surnames.
Jane Austen's Names: Riddles, Persons, Places by Margaret Doody, University of Chicago Press, 2015.
Our book, An InfamousMistress: The Life, Loves and Family of the Celebrated Grace Dalrymple Elliott is available now from Pen and Sword and all good bookshops. 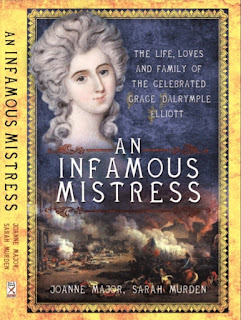 Divorced wife, infamous mistress, prisoner in France during the French Revolution and the reputed mother of the Prince of Wales’ child, notorious eighteenth-century courtesan Grace Dalrymple Elliott lived an amazing life in eighteenth- and early nineteenth-century London and Paris.
Strikingly tall and beautiful, later lampooned as ‘Dally the Tall’ in newspaper gossip columns, she left her Scottish roots and convent education behind, to re-invent herself in a ‘marriage-a-la-mode’, but before she was even legally an adult she was cast off and forced to survive on just her beauty and wits.
The authors of this engaging and, at times, scandalous book intersperse the history of Grace’s tumultuous life with anecdotes of her fascinating family, from those who knew Thomas Jefferson and George Washington, and who helped to abolish slavery, to those who were, like Grace, mistresses of great men.
Whilst this book is the most definitive biography of Grace Dalrymple Elliott ever written, it is much more than that; it is Grace’s family history which traces her ancestors from their origin in the Scottish borders, to their move south to London. It follows them to France, America, India, Africa and elsewhere, offering a broad insight into the social history of the Georgian era, comprising the ups and downs, the highs and lows of life at that time.
This is the remarkable and detailed story of Grace set, for the first time, in the context of her wider family and told more completely than ever before.
You can also visit Joanne and Sarah at All Things Georgian where they blog about anything and everything to do with the Georgian era.
Images supplied by Joanne and Sarah:
Grace Dalrymple Elliott by Thomas Gainsborough. Metropolitan Museum of Art.
Tilly Tremayne as Lady Dalrymple in the PBS version of Persuasion.
Jane Austen, coloured copy of a drawing by her sister Cassandra, held by the University of Texas.
Lady Dalrymple and [her daughter] Miss Carteret escorted by Mr Elliot and Colonel Wallis, from a 1909 copy of Persuasion.

Is she related to the General Dalrymple or his son who was involved in the bigamous marriage case of Dalrymple v Dalrymple?

Hi, thanks for dropping by. I'll forward your question to Sarah and Joanne as they are the experts on the Dalrymples! All the best,
Sue.

Hi Regencyresearcher thank you so much for your question. The answer in short is - yes, Grace Dalrymple Elliott was related, but she was a very distant relative. We do give more information about the familial connection to the Earls of Stair in our book 'An Infamous Mistress'.

Many thanks for clearing up that query, Jo and Sarah. What a fascinating family history!