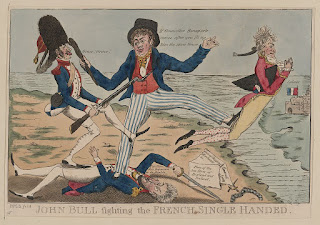 During the age of the French Revolutionary Wars, the Home Office wanted good, reliable intelligence on the domestic front as well as in the sphere of war. Persons of interest to the authorities included the government's political opponents and critics, disaffected Englishmen, Irish and Scots, and even workers agitating for better wages and working conditions.

If the government believed that trouble was brewing, it was a far better use of resources to ensure that troops were already in place before they were needed, and this is one of the reasons why spies were needed. Whitehall relied heavily on reports from local magistrates and concerned loyalists for news of potential troublemakers in the provinces.

Unfortunately many local justices seem to have been particularly pusillanimous and communicated every minor happenstance. Letters poured into the Home Office on a daily basis, and the clerks had the unenviable task of winnowing the chaff to determine which letters and spy reports were important and required immediate action, and which were trivial.

Several local officials employed spies and informers to gather information, which they forwarded to London. For example, magistrates like Col.Ralph Fletcher in Bolton, Rev. William R. Hay in Manchester, and clerk of the peace John Lloyd of Stockport, were highly active correspondents. Their spies and informers were given code-names in correspondence, such as ‘B’ or ‘S’; sometimes the term ‘confidential agent’ or ‘confidential person’ was used.